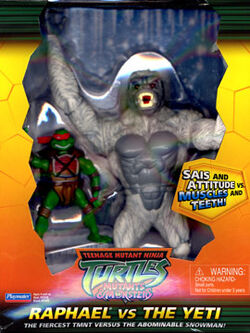 The Fiercest TMNT Versus The Abominable Snowman!

Separated from his brothers while on an adventure in the mysterious snow-capped Himalayan Mountains, Raphael finds himself all alone and face-to-face with a monster out of mythology - Yeti, the Abominable Snowman! With its towering height, massive muscles and razor-sharp fangs, the Yeti has been the undefeated king of the mountains for thousands of years... until now. Steel sais and ninjitsu skills versus brute strength, fighting gear armor versus very tough hairy hide! It's Raphael versus the Yeti in the Himalayan Mountains - an avalanche of action amidst a blizzard of blind fury! Banzai!

Retrieved from "https://turtlepedia.fandom.com/wiki/Raphael_vs_the_Yeti_(2005_action_figure_set)?oldid=392802"
Community content is available under CC-BY-SA unless otherwise noted.