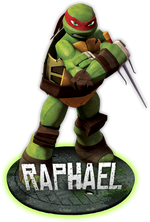 Raphael is the "hot-headed muscle" of the Teenage Mutant Ninja Turtles. He often lets his impulsiveness get in the way instead of using rational thinking. He has a soft-side. His weapon of choice is, like in every other variation, twin sai. He is voiced by Sean Astin.

In Rise of the Turtles, Raph was shown eaisily defeating Donatello and Leonardo in a training exersize, but had a pressure point hit from Splinter when he bragged about his win. Like the other turtles, Raphael begged Splinter to go up to the surface, and was psyched when he agreed. When at the surface, he was happy, but rather than finding something that excites him, he critisized what the other turtles were doing. When seeing the Kraang kidnap April, he countered Leonardo's obedience towards Splinter by asking "when do heroes ask for permission," threw the first punch at the Kraang. However, since they could not fight as a team, Raph and his brothers were unable to defeat any Kraang or save April. After the fight, when Splinter had to choose a leader, he was angry that Leo was chosen, and frequenrtley critized his choices as the leader, then saying "Ah stick it in your shell!". After they caught Snake, Raphael interrogated him with "Mutation Roulette" where he would either get the answers he wanted, or dump Ooze on him, while frequentley critizing Mikey's looks. He got the information he needed. After Sanke fled, he and Leonardo found him, but made it think that they lost him, then talked about about a fake plan to storm the base. He then said a few, touching words to his pet turtle Spike before sneaking inside of the Kraang base while using his and Leo's "plan" as a diversion. There, he was a much more effective fighter, and was the only one who could hold his own against Snakeweed. Him, Leo and Mikey, were able to defeat both the Kraang and Snakeweed, while Don saved April, ending the episode.

Add a photo to this gallery
Retrieved from "https://turtlepedia.fandom.com/wiki/Raphael_(2012_TV_series)?oldid=41034"
Community content is available under CC-BY-SA unless otherwise noted.