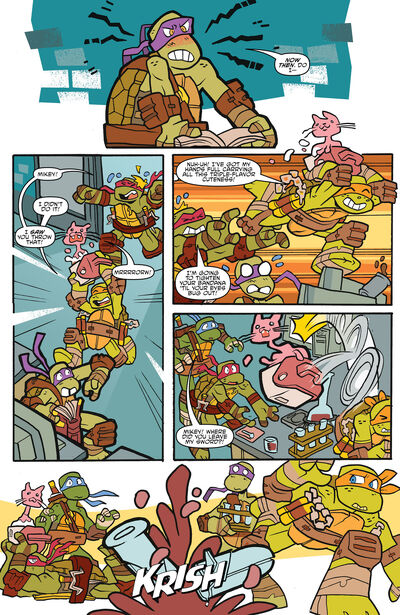 Quite Please is a back up story printed in Teenage Mutant Ninja Turtles: Amazing Adventures issue #5.

Donatello is in his lab working on a chemistry project. Talking to himself, he muses that scientists are neither "glass half empty" nor "glass half full," because they know that the proverbial glass is already completely full—with half liquid and half gas.

Donnie is working on isolating a polymer in his project, but is interrupted by Leonardo barging in. Leo explains that he's practicing kata with Splinter, but that he's lost one of his paired katana. Donnie sardonically asks Leo if he lost a sword on a rooftop during a Foot Clan fight when others weren't looking. Leo tells Donnie to stick to chemistry jokes, because at least those are almost funny. Leo clarifies that his katana isn't lost—Mikey "borrowed it," and Leo immediately starts rummaging through Donnie's lab. Donnie reminisces how Mikey "borrowed" his magnifying glass once, and Donnie found it three months later covered with jam and pepperoni—but Mikey hasn't been in the lab recently, and Donnie points out to Leo that he's trying to work on a project. Leo leaves the lab and Donnie impatiently returns to his work.

Donnie hasn't had a chance to refocus on his work when he realizes someone his prowling behind his chair. It's Raphael, who announces he's bored and pulls Donnie into a friendly headlock. Donnie barks at Raph to get out, and Raph decides it was foolish to think he could go to Donnie to find some fun.

Now increasingly irritated, Donnie again tries to refocus on his work, but is interrupted by Michelangelo, who enters the lab carrying Ice Cream Kitty in a cooler. Mikey is giving Ice Cream Kitty an impromptu tour of the lab, setting her down on the tabletop where she was mutated. Messy residue from Ice Cream Kitty's body is already making a mess all over Donnie's workspace, and Donnie simmeringly points out that Mikey is getting "mutated biomass" all over his "precision instruments." With this Mikey, immediately grabs Ice Cream Kitty and flees, sensing that Donnie uses more complicated words the angrier he gets.

Struggling with anger, Donnie again tries to refocus on his work, only to be interrupted by Raph angrily chasing Mikey into the lab. Raph has food on his head, and accuses Mikey of throwing it at him. Mikey is running while carrying Ice Cream Kitty in the cooler, insisting to Raph that he was too busy carrying her to have done it. Leo runs in to immediately ask what Mikey has done with his sword, but arrives to see the cooler knocked out of Mikey's hands with Ice Cream Kitty still in it. Raph dives to catch the cooler, but in the chaos, Donnie's chemistry beakers are struck and shattered. Donnie erupts in rage, and picks up two bō to immediately chase everyone else out of the lab. Mikey briefly returns to the lab door to ask Donnie if he's still willing to eat marshmallow and banana pizza later. Donnie impatiently slams the sliding door in Mikey's face.

Now content that he can work in peace and quiet, Donnie sits back down to his workstation. At first, he enjoys the sounds of nothingness, but quickly realizes that the pitch silence is too quiet for him.

In a sewer tunnel very close to the street surface, Donnie is sitting just underneath a street grate with his sketchbook and a pencil. April climbs up some pipes to Donnie's location, asking him why he's here. With chaotic sounds of New York City street traffic in the background, Donnie explains that he needed some "white noise" to help him concentrate on his work. The last scene reveals a page from Donnie's sketchbook, where he has drawn various doodles, some concept sketches of a "Shellacopter," and has also drawn a heart with an arrow through it emblazoned with "A.O. + D.H." (the initials of April O'Neil and Donatello Hamato).

Add a photo to this gallery
Retrieved from "https://turtlepedia.fandom.com/wiki/Quiet_Please?oldid=338928"
Community content is available under CC-BY-SA unless otherwise noted.