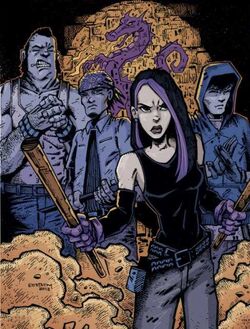 In the IDW continuity, the Purple Dragons are a street gang who frequents the neighborhoods near the Second Time Around shop. Previously they were under the leadership of Arnold "Hun" Jones and Brooklyn S. Bridge, until both men married and moved on with their lives. Many years later, Bridge's daughter Angel took over leadership of the Dragons, turning them less into a violent gang and more a vigilante group or a community watch.

The Turtles first encountered the Dragons when they were mistaken for Foot Clan mutants in its capacity as the Neighborhood Watch, the Purple Dragons often clashed with the Foot Clan, who terrorized the neighborhood, and also had unpleasant experiences with the mutants Old Hob and Alopex. When the misunderstanding was straightened out, they became tentative allies of the Turtles, though this was mostly because of Angel's leadership. Particularly well-known members include (behind Angel) Link, Malo and Chun.

However, Hun soon lost control of the Dragons when he attempted to lead them against the O'Neils, only to be thwarted by the neighborhood residents. He was arrested by Kara Lewis, and soon became a fugitive. The Dragons fell into disarray without Hun or the Foot Clan in charge of them, a situation that only ended when Hun's son Casey Jones took over leadership. This restored the Dragons more to a vigilante group, assisting the Foot Clan in its missions and fighting off the Triceraton invasion.