In the IDW continuity, Puggle is a human-born mutant platypus and mutagen bomb victim who, during the six-month time skip between issue #100: City at War, part 8 and issue #101, became one of the residents in the newly-quarantined Manhattan neighborhood of Mutant Town. Puggle, along with some other fellow mutants such as Bandit and Diamond, was recruited into Old Hob's Mighty Mutanimals to help enforce Hob's interests within the neighborhood's walls.

In issue #101, Puggle and Bandit caught Mona Lisa carrying an unauthorized quantity of food which she had actually stolen from the Mutanimals' food bank, which Mona had intended to donate to Alopex's shelter. The two enforcers started trying to rough Mona up, but Jennika came to her rescue and easily defeated the enforcers. But Puggle and Bandit returned with Diamond, an even more powerful enforcer, and Diamond severely injured Jenny as the other two enforcers seized Mona. In issue #102, Sally Pride, a Mutanimals commander, was on a nearby rooftop visiting with Raphael and Pepperoni when they witnessed the fight. As Diamond was openly pondering whether to kill Jenny, Sally stepped in and disciplined the enforcers, announcing their impending demerits and terminating Diamond's employment on the spot. 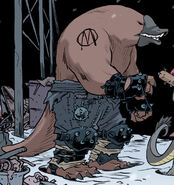 Retrieved from "https://turtlepedia.fandom.com/wiki/Puggle?oldid=521720"
Community content is available under CC-BY-SA unless otherwise noted.