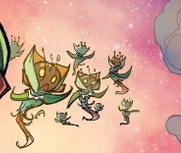 In the IDW continuity, the Polyglot are a species of sentient, floating flowers from the Dimension X planet Totus. They are part of Totus' integrated ecosystem which functions as one large organism, but with their power of speech, Polyglots serve as the planet's representatives to off-planet visitors. A mutant Polyglot called Poly-95480, a.k.a. Polly, as well as other mutants of Totus' wasteland, are not integrated with the rest of the system, having been cast out and no longer supported by it. But as the mutants of Totus' wasteland region were created by one of Krang's many war crimes, Poly-95480's mutant nature as a separated organism allowed her to do what other Polyglots could not: Travel off-planet to Neutrino to be Totus' ambassador in the trial against Krang.

Retrieved from "https://turtlepedia.fandom.com/wiki/Polyglot?oldid=468021"
Community content is available under CC-BY-SA unless otherwise noted.