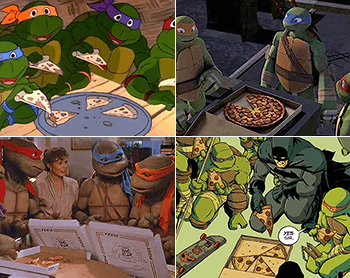 Pizza is a type of flatbread that originated in the 18th century or early 19th century in the city of Naples, Kingdom of the Two Sicilies (today part of modern Italy). Pizza has since become popular in many parts of the world, especially the United States of America, where distinctly American style of pizza has developed. Pizza was made as the Ninja Turtles' favorite food as Kevin Eastman and Peter Laird often ate it for lunch while working on the original comics.[citation needed]

Pizza occasionally appeared in the Mirage universe, but it never had the central role in the Turtles' diet as it did in other versions.

The 1987 cartoons are, along with the comics based on them, a TMNT universe in which the Ninja Turtles all share an intense affinity for pizza. The Turtles always get their pizzas by going on the streets to a pizza parlor, dressed so no one could see that they are mutant turtles. Sometimes all four go, sometimes only one goes.

Pizzas are also the Turtles' weakness. The Shredder is aware of this, as many of his plans to destroy them involve pizza (like the episodes "The Case of the Killer Pizzas", "Pizza by the Shred" etc.). particularly Michelangelo. They are hardly ever seen eating anything else; however they are very flexible with what toppings they like on their pizza, experimenting with all sorts of items in every possible combination including:

issue #10 - While in Chicago, Raphael talks about wanting beer and stuffed crust pizza and a hot dog.

Pizza occasionally appeared in the 2003 TV series. Though not as much as they are also seen eating things such as Chinese food, Barbeque Soy Chips, Scrambled eggs and even ice-cream.

In the Dreamwave comic series, Leonardo can be seen eating pizza in "Bend It Like Turtles".

Similar to the 80s cartoon, the Turtles heavily enjoy consuming pizza, which they've grown to love since the first episode of the series. In "Karai's Vendetta", it was also confirmed that they, mostly Mikey, place strange toppings on their pizzas ( such as shrimp and sardine).

Pizza slices are often used as a health power-up in the TMNT video games. In Turtles in Time, one type of pizza grants the Turtles temporary high speed spin attack and invulnerability and they shout out "PIZZA POWER!!!"

The turtles also eat pizza in the film series. Except in the third film, they are not seen eating pizza but despite it not appearing, pizza does get mentioned. The second film begins with a sequence of people eating pizza all over New York.

In the 2014 film the Turtle's couch is made of Pizza Hut's pizza boxes. Another scene involves Splinter giving each of the Turtles punishments after he found out that they sneaked out to the surface, Michelangelo was forced to balance himself upside down while resisting the urge when his sensei offers the " Novantanove Formaggio, the 99 cheese pizza to which Donatello has stated that it's "culinary impossible".The known cheese we've known in the pizza are:

It is also explained that April is the reason they love pizza as she fed it to them when they are still her childhood pets.