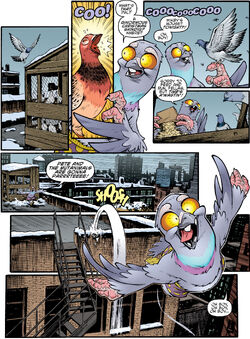 In the IDW continuity, there is a pigeon coop located on a building rooftop in New York City where the mutant Pigeon Pete and his non-mutant cousin Jimmy originally lived. Since Old Hob and Slash mutated him, Pete no longer lives there, but still visits the coop periodically.

The coop is first seen (and destroyed) in New Mutant Order, part 4, during the Turtles' and Mutanimals' street battle against Bebop and Rocksteady. In one scene, Rocksteady grabs Raphael and Alopex and tosses them high into the air, where they crash down on the chicken coop, where they soon discover themselves trapped in the tangled coop wires in an awkward position with their faces close together. Pete arrives, explains that the coop they just destroyed and are now "wearing" was his "old house," and offers to help the pair free themselves from the wires.

The coop is seen again in the Christmas Special, when Jimmy, who had previously overhead Donatello on the church rooftop talking about Michelangelo's Christmas party, flew back to the since-rebuilt coop where Pete was visiting and feeding his pigeon kin. Jimmy tells Pete about the party, prompting Pete to quickly finish feeding the pigeons and fly away to spread the news to the other Mutanimals.

The coop is last seen in Desperate Measures, part 1. Slash, who had quit the Mutanimals in Order from Chaos, part 4 and had since been living nomadically around the city, is sitting against the coop, reading from the book The Grapes of Wrath. Jimmy arrives, and he and Slash converse bilingually about the book. As soon as Slash finishes reading a passage from the book aloud, the entire building starts rumbling, and Slash quickly tells Jimmy to fly away just before the entire building collapses under Slash and the coop. The building has been intentionally collapsed by the Earth Protection Force so that Agent John Bishop could capture and enslave Slash.

Retrieved from "https://turtlepedia.fandom.com/wiki/Pigeon_coop?oldid=461321"
Community content is available under CC-BY-SA unless otherwise noted.