In the IDW continuity, Dr. Patrick Miller is a professor and an expert on the Foot Clan. He first came to the attention of both the Turtles and the Foot Clan when giving a lecture, which was based on a past expedition in which he had found part of the Ashi no Himitsu. Karai approached him after the lecture, stating that she had access to pages of the book.

He discovered that he was in the hands of ninja when a fight broke out between the Foot and the Turtles shortly thereafter. Shredder revealed that they were the same Foot Clan he had been studying, and presented him with a partial copy of the Ashi no Himitsu for study. The Turtles attacked shortly afterwards, and extracted a reluctant Miller from the premises.

Despite being shocked by the existence of mutants, he shared his findings in the book about resurrection and the Dragon Warrior. However, he was reluctant to believe that Shredder was the same Oroku Saki of the book, as well as skeptical that the Turtles were more than "talented mimics that have watched too many kung-fu movies." However, his skepticism began to waver when Michelangelo was able to read from the book.

However, Miller was horrified when he learned that Splinter planned to destroy the Ashi no Himitsu. When the Foot Clan arrived, he attempted to take the book back to Shredder, but it was taken instead by April O'Neil. He soon regretted his choice, learning that Shredder wanted him to find the resting place of the witch Kitsune, under threat of death. He accompanied Shredder to Japan in the prologue of City Fall, where Kitsune was found.

Miller kept a lower profile after this, but was sought out by April over a favor that he owed the Turtles for rescuing him. Knowing he had been on the wrong side, he helped her translate part of a mysterious scroll he had stolen from the Foot Clan's library, which spoke of a powerful family of immortals.

He was then killed by a Foot assassin, as part of Karai's efforts to cleanse "outsiders" from the Foot Clan's presence. 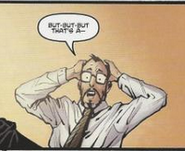 Retrieved from "https://turtlepedia.fandom.com/wiki/Patrick_Miller?oldid=524219"
Community content is available under CC-BY-SA unless otherwise noted.