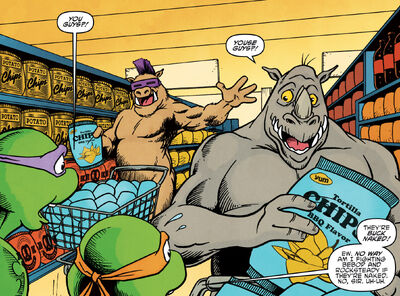 Donatello, Raphael, and Michelangelo encounter an empty spaceship in the park. While attempting to deduce where it could have come from, they hear a scream. They head in its direction and find people fleeing from a grocery store. Inside, they find a buck-naked Bebop and Rocksteady. They'd come from Eden World to get some snacks, attempting a barter (a word that Leo had to teach them) instead of steal, but everybody had run off. As the mutants are talking, Raphael and Ninjara suddenly attack Bebop and Rocksteady. After a brief argument with his brothers, Raphael decides to just leave, and takes Ninjara with him. Bebop and Rocksteady take off with their snacks, with Leonardo using Splinter's cheese money to pay for their food. Donatello questions the wisdom of that action, but Leo insists that Splinter would understand if it meant keeping the two former villains on the straight and narrow.

Add a photo to this gallery
Retrieved from "https://turtlepedia.fandom.com/wiki/Paper_or_Plastic%3F?oldid=448131"
Community content is available under CC-BY-SA unless otherwise noted.