Oroku Nagi was the deceased older brother of Oroku Saki, also known as the Shredder, and a former rival of Hamato Yoshi, in the Mirage Comics.

Oroku Nagi was once along with Hamato Yoshi (the master of Splinter who became the turtles' adoptive father) a member of the Foot Clan. Nagi competed with Hamato Yoshi for the love of a woman named Tang Shen. Shen loved only Yoshi, and a feud erupted between Yoshi and Nagi and soon the two were bitter rivals.

Nagi's love for Tang Shen transformed over time into obsession, but when he confronted her one evening with his feelings, Shen refused his affections, as she loved Yoshi too much to leave him. As Nagi began to beat her in his jealousy, Yoshi came home and witnessed the misdeed. Which led to Yoshi killing Nagi in a blind fit of rage to protect Tang Shen. No matter what the circumstances, Yoshi had dishonored himself by killing Nagi, as he was a member of his clan. Yoshi was given two choices, honorable suicide or self-banishment from the clan, he chose to flee to New York City with Shen.

However, Nagi had a younger brother named Saki, who was only 7, when he learned of his older brother's death, which flared into hatred of Yoshi, and vowed vengeance on him. After he was appointed by the leadership of the clan to lead the New York branch of the Foot, Saki finally took cruel revenge on Shen and Yoshi. However Yoshi's house rat Splinter survived the assassination attempt, and after he and four baby turtles became mutants, he taught his foster sons in the arts of ninjutsu, so they could avenge the death of his beloved master in Splinters name. Eventually the turtles fulfill this oath and bring Saki to justice after a severe struggle.

In the Tales Vol. 2 story "A Ghost Story", years later Splinter and the Turtles take a spiritual pilgrimage to Hamato Yoshi's house and find that it is being haunted by Nagi's spirit, which struck the nearby home of Tang Shen. To rid the world and the memory of his Master of Nagi's Visitation, Splinter saw no other choice than to exorcise Nagi by burning the house down and thus Nagi's last link to his lost earthly existence is cut. 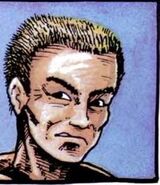 Add a photo to this gallery
Retrieved from "https://turtlepedia.fandom.com/wiki/Oroku_Nagi_(Mirage)?oldid=527650"
Community content is available under CC-BY-SA unless otherwise noted.