Oroku Maji was the father of Oroku Saki in the IDW comics. Under the command of Foot Clan founder Takeshi Tatsuo, he served as a ninja with his friend Masato (Hamato Yoshi's sensei), but both secretly disagreed with Tatsuo's brutal ways. Learning of Takeshi's dark magic from the witch Kitsune, he staged a coup to bring honor to the Foot Clan, killing the leader.

However, he was cursed by Kitsune before she departed, and the curse was realized when Tatsuo was reborn as Maji's son Saki. Maji tried to use love and guidance to keep his son from becoming the "monster" Tatsuo was, but Kitsune's interference led to Saki learning of his past life. He killed Maji for revenge.

When mentioned by Splinter, he expresses dismay over the fact that Maji's own son was the one who would undo the honorable work he had put into the Foot. His grandson would turn the Foot into a illegitimate business and his great-granddaughter Karai would discover the family history and join the Foot Clan at her grandfather's side as his second-in-command. 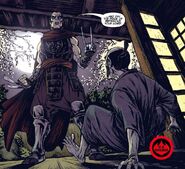 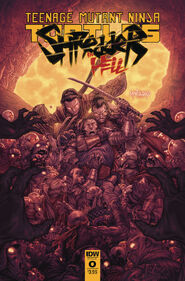 Add a photo to this gallery
Retrieved from "https://turtlepedia.fandom.com/wiki/Oroku_Maji?oldid=450973"
Community content is available under CC-BY-SA unless otherwise noted.