Old Hob is on the rooftop of a building waiting to meet Splinter and the Turtles minus Leonardo to offer them help (also seen in City Fall, part 2). Before they arrive, he tells Slash some about his history. Hob tells him that both of their main problem is humans. He tells Slash he's lucky to not have had much dealings with them. Hob, on the other hand, has dealt with humans far too much.

Hob tells Slash how he was once the pet cat of a boy, whose name he can't remember (his memories from before his mutation are fuzzy). Hob had all the food, rest, and playtime he could want. Life was great. Until one day the boy's mother, fed up with the boy forgetting to change Hob's litterbox, throws Hob out onto the street. Hob tells Slash about life on the streets. There's plenty of food to be found out there, but you have to fight for it. One day he found four turtles covered in a glowing green slime, and took one to eat. Distracted by the burning sensation of the green ooze in his mouth, the rat that jumped out and attacked Hob to protect the turtle got the best of him, clawing out his right eye. Hob was in great pain as he began mutating, transforming. He describes it as being like "gettin' run through a sausage maker". After recovering from the mutation, Hob was stunned to realize he had arms instead of forelegs, and could now understand human speech. He tells Slash about approaching Baxter Stockman and offering to find the rat, Splinter, and bring him in. Before he could get around to that, dozens of tests were done on him at StockGen's laboratories. Even then, Hob could tell that Stockman didn't care at all whether Hob lived or died. By watching Stockman and Chet Allen experimenting with the mutagen, Hob realized how valuable it was. He played stupid so Stockman wouldn't realize how much he was catching on to, and eventually convinced Stockman to let him hunt down Splinter and the Turtles. Stockman sent Hob out onto the streets to begin the hunt and fronted him cash to aid in the search. Hob realized that cash was going to be useless without people under him to help him use it. He found people he could recruit to his cause, people without direction and looking for a leader, willing to do anything somebody told them.

Hob tells Slash about the first time he saw Splinter and the Turtles all together (at the time minus Raphael), and how he was awestruck by their unity. They were a team, a family; Hob was all alone. Despite all the recruits he had, Hob had no family. When he failed to bring in Splinter a third time, Stockman shot him and left him to die. Stockman didn't know that Hob had a vial of ooze hidden under his shirt that just so happened to be in the path of the bullet when he got shot the vial broke and healed his bullet wound. Hob tells Slash that he's got a plan to show Stockman and all the other humans just what they're capable of, that they're not going to be held captive and treated like test subjects anymore. At that moment Splinter, Donatello, Michelangelo, and Raphael arrive, and Hob tells them he wants to discuss business.

Cover RI by Dave Wachter.
Add a photo to this gallery 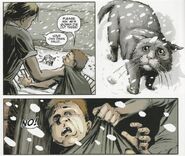 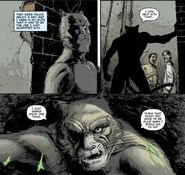 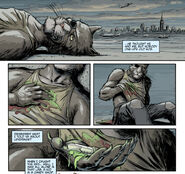 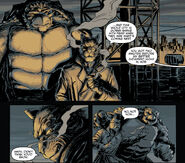 Retrieved from "https://turtlepedia.fandom.com/wiki/Old_Hob_(IDW_issue)?oldid=470425"
Community content is available under CC-BY-SA unless otherwise noted.