In the IDW continuity, Old Hob's weasels are a trio of mutants first appearing in Teenage Mutant Ninja Turtles issue #102. They are:

The characters were created by longtime TMNT contributor Sophie Campbell.

In a shady arrangement with Oroku Karai of the Foot Clan, Old Hob mutated the three weasels to be bartered to the Foot as new recruits in exchange for food, ammunition and winter gear for Hob's Mutanimals in Mutant Town. But as Hob and Karai's subordinate Koya argued over transit details, Diamond, a former Mutanimals enforcer who Sally Pride had just fired, covertly opened the weasels' crate to release them, but Diamond was herself attacked and bitten by them. The aggressive weasels escaped onto the streets of Mutant Town in search of food.

They later rampaged through Alopex's mutant shelter, devouring food and running away with more. Jennika, Mona Lisa and Sally Pride followed their trail, and found them playing with Lita, a homeless albino turtle girl. They quickly discerned that the weasels had the intellectual development of babies or small children, as seen when they greeted Hob as their father. Hob recaptured them to hand over to Koya, but was interrupted when Sally Pride confronted and attacked him. 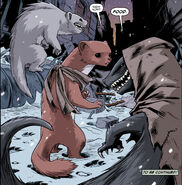 Retrieved from "https://turtlepedia.fandom.com/wiki/Old_Hob%27s_weasels?oldid=522120"
Community content is available under CC-BY-SA unless otherwise noted.