Of Turtles and Stones and Mary Bones

Of Turtles and Stones and Mary Bones

Of Turtles and Stones and Mary Bones is issue 6 of the TMNT Adventures, and was published in November 1989.

Jess Harley in the Deep American South bayou steals what he doesn't know is the Turnstone from Mary Bones, according to rumors a swamp witch. He travels by bus to New York City in an attempt to sell it. Mary Bones tracks him into town, and takes back the Turnstone and uses it to transform Jess Harley into Leatherhead.

Krang is also after the Turnstone, when learning it is on Earth.

The Shredder tricks Leatherhead into believing the turtles work with Mary Bones. Shredder, Bebop, Rocksteady and Leatherhead encounter the turtles at an underground bridge beneath New York City, and Bebop and Rocksteady throw the turtles' motorized skateboards off the bridge.

Shredder eventually reveals that he never intended to honor his end of the deal with Leatherhead, and the turtles fight Shredder, Bebop and Rocksteady. Leatherhead, in anger over Shredder lying, begins to stomp on the underground bridge, despite the Turtles' warning. The bridge collapses, and Leatherhead seemingly plummets to his demise...

Shredder, Bebop and Rocksteady, now being on the opposite side of the hole, run away. Suddenly a light appears, and Mary Bones shows up, telling the turtles to not mourn Leatherhead, because they will triumph in the final conflict.[1] 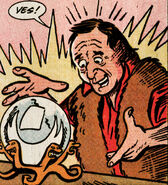 Retrieved from "https://turtlepedia.fandom.com/wiki/Of_Turtles_and_Stones_and_Mary_Bones?oldid=470444"
Community content is available under CC-BY-SA unless otherwise noted.