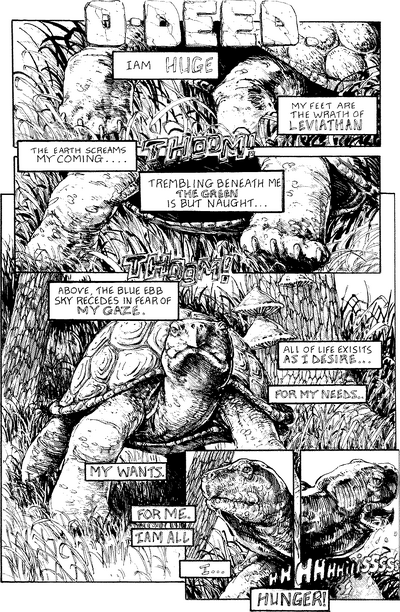 Stomping out of some brush, a tortoise thinks to itself that it is a god; that the only thing that matters in the universe is its own desires. And what it desires is food.

Now a rock turtle, it sees a cricket in the middle of a road. The rock turtle considers how the world views it as a ferocious, terrifying creature. As the rock turtle approaches the cricket, though, a car comes screeching to a halt, just short of running it over.

With a scream, Michelangelo awakens in his bedroom, having just been roused from a terrible nightmare. Splinter enters the room and calms "Michael," telling him that as real as it felt, what he experienced was only a nightmare. As Michelangelo goes back to sleep and Splinter exits the room, the old rat sheds a tear, having apparently known the truth about his son’s distress.

Add a photo to this gallery
Retrieved from "https://turtlepedia.fandom.com/wiki/O-Deed?oldid=509263"
Community content is available under CC-BY-SA unless otherwise noted.