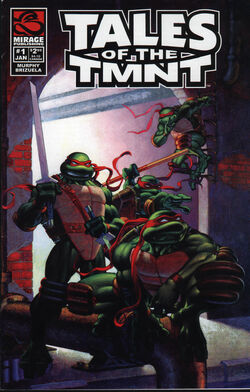 The youthful turtles take their first trip without Master Splinter, seeking out a fresh water supply that they discovered on a mysterious map that Donatello found in an old book about the origins of New York City. After exploring long forgotten parts of the sewers, the mutants discover more than just water.

While reading an old book about the discovery of Manhattan by European explorers, 12-year old Donatello discovers an old map claiming to lead to dinosaur tracks and a fresh water spring. The young turtles are eager to explore on their own, without Master Splinter chaperoning. After much debate, Splinter relents and allows them to take their little adventure. While following the map with varying success, Leonardo begins asserting himself as leader. Eventually the Turtles discover ancient preserved dinosaur tracks, which lead them to an undiscovered underground city that predates even Native American settlement of Manhattan. The city sits on the shore of an underground freshwater lake, and the turtles, excited with their discovery dive right in. Except Donatello, who sits on the shore analyzing the water's contents. While swimming the other Turtles are attacked by a group of semi-humanoid worm creatures. While fighting Donatello discovers the lake is high in lead and cadmium, possibly poisonous to the worm creatures. He manages to stop the fighting, and attempts to explain to the worm people how they can purify their water. While leaving Donatello questions his analyses of the situation due to not knowing anything about the worm people. He vows to return to check in on them regularly to monitor their progress. But he's still young, and never does. 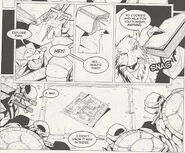 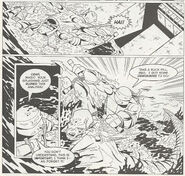 Retrieved from "https://turtlepedia.fandom.com/wiki/Not_Forgotten?oldid=531627"
Community content is available under CC-BY-SA unless otherwise noted.