Nobuko is an Archie comics character of TMNT that appeared in Teenage Mutant Ninja Turtles Adventures #62 (Once Again, Always). April O'Neil and the Ninja Turtles would meet her and few other ninjas in training in the future. She was revealed to be April's great-granddaughter. Her last name is not mentioned.

Nobuko is first presented in issue 61, set in the future. Leonardo's future self reveals her to be one of his students and to be April's great-granddaughter. While Nobuko is excited to meet her ancestor, April's left somewhat shocked. In issue 62 (Dreamland), Nobuko is part of a group of students close to Leonardo. Among her teammates are Miles, Carmen, and Bob, a mutated baboon. Little is actually known about Nobuko's relationship with her teammates or her sensei Leonardo, though its obvious he does care a great deal about them as family.

Nobuko and her team played a role in helping the Turtles in the Cyber Samurai story arc. With the exception of Bob, she and her other teammates use swords as their choice of weapons. 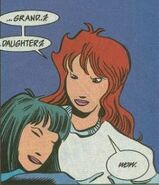 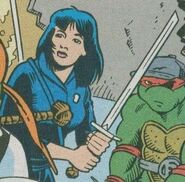 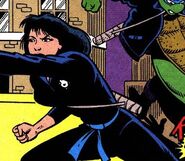 Retrieved from "https://turtlepedia.fandom.com/wiki/Nobuko?oldid=490357"
Community content is available under CC-BY-SA unless otherwise noted.