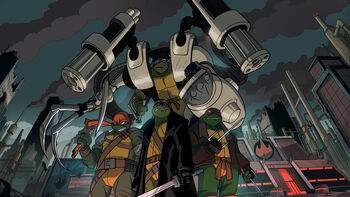 The Ninja Turtles in the alternate future of the episode Same As It Never Was were mired by much loss, including the world's rule to The Shredder, the lives of Splinter and Casey Jones, and the unknown whereabouts of one of their own.

When a Donatello from another reality entered their own, they reunited and set out to end the pain once and for all.

Retrieved from "https://turtlepedia.fandom.com/wiki/Ninja_Turtles_(Same_As_It_Never_Was)?oldid=480062"
Community content is available under CC-BY-SA unless otherwise noted.