Start a Wiki
watch 02:40
Rise of the TMNT
Do you like this video? 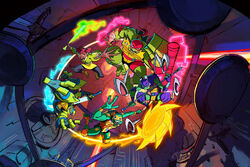 The Ninja Turtles are trained in the art of Ninjutsu by Master Splinter. They also have mystic weapons which grant them special powers (except for Donatello, whose weapon is technological).

Retrieved from "https://turtlepedia.fandom.com/wiki/Ninja_Turtles_(Rise_of_the_TMNT)?oldid=542701"
Community content is available under CC-BY-SA unless otherwise noted.