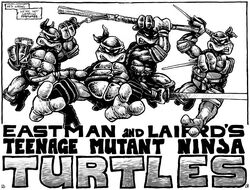 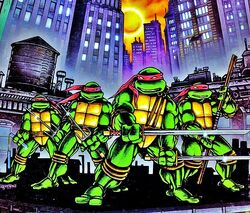 The Mirage Turtles were the main characters in the original Turtle comics produced by Mirage Studios in 1984, created by writers Kevin Eastman and Peter Laird.

As the story goes, sometime in 1970 (51 to 52 years ago), the four Turtles were exposed to the Mutagen when after a traffic accident with their young owner as a bystander. The mutagen mutated them into a more humanoid form and more developed intellect. Splinter, a rat once owned by Ninjutsu master Hamato Yoshi, was also exposed. Splinter was fantastically smart and learned Ninjutsu by mimicking his master. Hamato Yoshi moved from Japan to New York in order to escape death after killing Oroku Nagi, another member of the Foot Clan, over the bitter love triangle between him and Tang Shen. However, Yoshi and Shen were found and killed by Nagi's younger brother Oroku Saki. Saki was the leader of the New York branch of the Foot Clan and had taken the identity of The Shredder. Yoshi's death had left Splinter homeless.

Splinter happens to see the Turtles after the accident and adopts them. Within days, both Splinter and the Turtles grow to human size and develop speech. Splinter trained them in Ninjutsu, so they could avenge the murder of Hamato Yoshi and his wife. Splinter choose their names from a book about Renaissance artists: Donatello, Leonardo, Michelangelo, and Raphael. The Turtles challenge Shredder and the Foot Clan on a roof top and defeat them. Shredder falls off the roof, with a grenade that blows up.

Appearances in other media

In the 2009 crossover movie, Turtles Forever, the Mirage Turtles appear as the original Turtles of the original Turtle world. Ch'rell the evil alien Utroms known as the Shredder travels to the world of the Mirage Turtles so he can destroy them which would end all Ninja Turtle life in every alternative dimension. The Teenage Mutant Ninja Turtles cartoon series that debuted in 2003 ended with Turtles Forever, a crossover movie with two other Turtles properties: the 1987 cartoon and the universe of the original Mirage comics.

The Teenage Mutant Ninja turtles of the 1987 and 2003 series travel to Turtle Prime to stop the Shredder. 2003 Raphael comments with satisfaction on how much more grim this world is, while the 1987 Turtles are afraid. The Mirage Turtles encounter their counterparts and decide that they are a threat, attacking. The Mirage Turtles prove far more aggressive and skilled than both 1987 and 2003 turtles, and are prepared to kill them, with Mirage Leonardo narrating the fight. He is just about to stab 2003 Leonardo with his katana blades, but before he can, 2003 Leonardo mentions the Shredder and Mirage Leonardo demands an explanation. 2003 Leonardo explains everything to the Mirage Turtles telling them that their Shredder has come in the stolen Technodrome of the 1988 Shredder to end all Turtle life.

The twelve Turtles, with the aid of 2003 Master Splinter, Karai, and even the 1987 Shredder and alien ally Krang, engage Ch'rell in battle, but he grows to massive height using molecular amplification technology from Dimension X. When Ch'rell is accidentally clipped by the energy beam from the Technodrome, however, his armor is damaged, and the Turtles all try to force him into the beam ... before it is abruptly cut off when Rocksteady, a mutant who worked for 1988 Shredder, trips over the power cable and unplugs it. Ch'rell takes this opportunity to grab the four Mirage Turtles and begins crushing them. At the last minute, the 1987 Turtles throw explosive throwing stars at him, causing him to trip and drop the Mirage Turtles. Ch'rell then resumes his attack - until Bebop, from 1987, plugs the beam power cable back in and thus inadvertently obliterates Ch'rell.

With their foe defeated, the Turtles watch as their respective realities restore themselves. The 1987 cast take the Technodrome and return to their homeworld, while the 2003 Turtles use the portal stick to return to theirs. The Mirage Turtles decide to go get some pizza to eat and comment on how the letters on the 1987 belts are a good idea.

A similar plot idea was used for the 2012 cartoon's episode "Trans-Dimensional Turtles", with the 2012 cartoon iterations replacing their 2003 counterparts. Similar to Turtles Forever, the 1987 and 2012 Donatellos are ambushed by the Mirage Turtles. However, they have no time to explain the situation since they have to stop a bomb planted in this realm's Channel 6 building (also given how difficult it was for the 1987 and 2003 Turtles to reason with the Mirage Turtles). The Donatellos are seen quickly diffusing the explosive device before returning to the 1987 realm, much to the Mirage Turtles' confusion.

Note: In this version, the Mirage Turtles made a nonspeaking cameo, whereas in Turtles Forever, they spoke in a low, gravely tone.

In both Turtles Forever and Trans-Dimensional Turtles, an inter-dimensional plot-launched by the 2003 Utrom Shredder in Forever and 1987 Krang and the 2012 Kraang Subprime in Transdimensional-involved the Mirage Comics world. This reality is referred to as Turtle Prime or the Primary Turtle Dimension, the destruction of which would set off a chain reaction wiping out all other Turtles and potentially their realities.