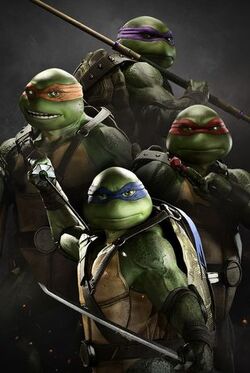 The Teenage Mutant Ninja Turtles, often stylized as TMNT, Ninja Turtles, or simply Turtles, who originate from Mirage Studios, are playable guest characters in Injustice 2. All four are available through downloadable content as part of Fighter Pack 3.

By equipping one of four accessories—katana, bo, nunchaku or sai—players will be able to change their character loadout to play as Leonardo, Donatello, Michelangelo and Raphael respectively. Each will wield their own unique move sets, character powers, and special moves (With a couple of exceptions), but all four use the same Super Move. In online and tournament modes where specific loadouts are unavailable, players will be able to select each individual Turtle from the character select screen.

Deep below the surface, in the sewers of New York City, four turtle brothers were mutated by radioactive ooze and began training in the art of ninjutsu. While in a fight with the fearsome Krang — our heroes in a half-shell were jettisoned on a one way trip across the Multiverse.

It all began with Splinter, finding himself without a home for the first time after Oroku Saki a.k.a. Shredder killed his master Hamato Yoshi. Splinter became witness to a prevented accident in which a truck released a canister which bounced in the streets unnoticed by the crowd. The canister hit and shattered a young boy's glass jar which contained four baby turtles inside and fell into the sewer.

While the leaves and newspapers broke their fall, the canister was broken and spilt a green radioactive liquid. Splinter washed them off of the goo as much as he could and gathered them in a coffee can, then took them to his burrow for some sleep.

The next morning, the can had tipped over and the turtles, even Splinter doubled in size. Splinter and the turtles were developing intellect and even one of the turtles said Splinter's name. The turtles followed their adoptive father everywhere except above ground because humans would try to harm them as they do not understand.

Splinter then trained them in the ways of the ninja, teaching them all he learned from his master. Splinter then named them after the greatest Renaissance masters; Leonardo, Raphael, Donatello and Michelangelo.

The turtles' only human friends were Casey Jones and April O'Neil and a few others. They would battle many creatures and foes, before defeating their arch-enemy, the Shredder.

The Ninja Turtles serve as downloadable characters as part of Fighter Pack 3.

Each of the turtles has training in martial arts and ninjutsu. (In Donatello's case, he also has high intellect, and Leonardo is the only one among the four turtles who trained under two different masters.) All of them are also proficient with each of their weapons, which are: Dual Ninjakens, Dual Sais, Dual Nunchakus and the Bo Staff (Used by Leonardo, Raphael, Michelangelo and Donatello respectively).

Michelangelo: So you're like, totally wondering where we vanished off to, right?

Raphael: It was Krang, Mikey! He sent--

Leonardo: Raph, they might not know who Krang is. Donnie?

Raphael: Yeah, what he said. Anyway, we're the biggest heroes in our universe, right? That's why Krang tried booting us to Dimension X: to make way for his invasion.

Michelangelo: But instead we ended up on a different Earth! Way awesomer!

Donatello: Krang sent us across the Multiverse, to a universe vibrating on a unique frequency--which is a macrocosmic constellation of--

Raphael: Enough with the technobabble, Donnie.

Leonardo: Chill, Raph. Anyway, it shouldn't have surprised us that this new universe had its own intergalactic despot. We knew we had to stop Brainiac or else we--

Michelangelo: Just skip to the best part, bro! Once we whooped Brainiac, I asked that kooky clown lady where to get a good pizza, and she's all, [Harley impression] "Let me get you turtles the Supah Salty Pizza". I swear on my life, that pizza was the scrumdiddly.

Leonardo: Krang thought he'd beaten us, but in the end his whole plan backfired.

Michelangelo: Yeah, you could say this little adventure gave our Turtle Power one shell of an upgrade!

All: Lame! So lame! Epic fail! Even Shredder's--Are you serious? That was terrible!

Michelangelo: Whatever, dudes. That was funny.

To the right is the Teenage Mutant Ninja Turtles' base skin, Turtle Power. all Turtles share the same appearance, with the exception of their weapons.

Retrieved from "https://turtlepedia.fandom.com/wiki/Ninja_Turtles_(Injustice)?oldid=509342"
Community content is available under CC-BY-SA unless otherwise noted.