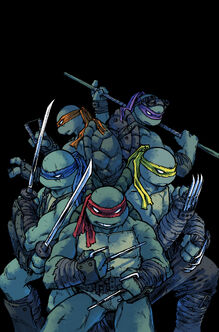 The Ninja Turtles are the protagonists of the IDW comic series, and sometimes of the spin-off series Teenage Mutant Ninja Turtles Universe and accompanying miniseries. Their origin is slightly different in this comic compared to other forms of Ninja Turtle media, as they are the reincarnations of four human teenage ninja warriors of Clan Hamato from centuries ago, reborn as turtles and then mutated. With the later addition of Jennika, who was previously a human from the Foot Clan, there are five.