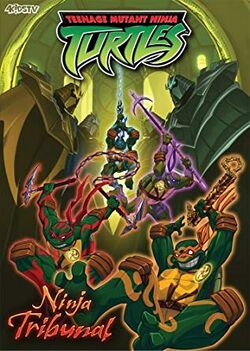 Ninja Tribunal is a DVD that was released in Region 1 territories on May 20, 2008.

When the Turtles are shanghaied and whisked away to Japan they are met by the mysterious Ninja Tribunal, a band of four immortal Ninjutsu masters who have been standing guard over our world against the forces of darkness for millennia. There, our heroes will train under the intense tutelage of the Tribunal and learn to unlock strange and mystical powers that exist within each of them. And its a good thing because they'll need all the power that they can get - after all, the malevolence that the Tribunal has been standing guard over is an ancient and evil warlord with supernatural powers known asthe Shredder! That is, the original Tengu Shredder from the year 300 AD! And if the world is going to stand a chance, the Turtles will have to be at the top of their game!

Retrieved from "https://turtlepedia.fandom.com/wiki/Ninja_Tribunal_(home_video_release)?oldid=398461"
Community content is available under CC-BY-SA unless otherwise noted.