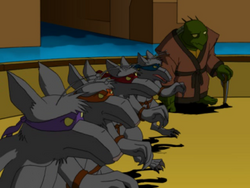 The Ninja Rats are a boss in the D'Hoonnib sewers level of Teenage Mutant Ninja Turtles 2: Battle Nexus. Unlike their 2003 TV series counterparts, they each wear a mask color that matches those worn by the Ninja Turtles. They also are capable of speaking English, or at least in a language communicable to the Turtles. They are led by a Turtle Master.

The Ninja Rats are also competitors in the Battle Nexus tournament.

Retrieved from "https://turtlepedia.fandom.com/wiki/Ninja_Rats_(2003_video_games)?oldid=487851"
Community content is available under CC-BY-SA unless otherwise noted.