"Ninja Rap" is a song performed by Vanilla Ice which appears in the 1991 film, "Teenage Mutant Ninja Turtles II: The Secret of the Ooze" and the film's soundtrack. According to an interview, Vanilla Ice was asked to do a rap song for the film. He was presented a script and told to "Make it Ice." Within the film, the song was improvised by Ice when the Turtles' battle with Tokka and Rahzar spills into a night club where he is performing.

Yo! It's the green machine
Gonna rock the town without bein' seen
Have you ever seen a turtle get down?
Slammin' Jammin' to the new swing sound
Yeah, everybody let's move
Vanilla is here with the new Jack Groove
Gonna rock, and roll this place
With the power of the Ninja Turtle bass
Iceman, ya know I'm not playin'- Devastate the show while the turtles are sayin':


Lyrics, fill in the gap
Drop that bass and get the Ninja Rap
Feel it, if you know what I mean
Give it up for those heroes in green
Just flowin, smooth with the power
Kickin' it up, hour after hour
Cause in this life there's only one winner
You better aim good so you can hit the center
In it to win it, with a team of four
Ninja Turtles that you gotta adore it's the:


Villains, you better run and hide
Because one day you might not slide
Choose your weapon but don't slip
Vanilla's in control with the flex of the mic grip
Rockin' the crowd the way it should be rocked
With the Miami drop that you like a lot
Hittin' like a Ninja Turtle when the bass kicks in
You better check your level
The power of the Ninja is strong—Fightin' all the crooks until they're all out cold.

Well, it looks kinda weird,
But it's plain t'be seen,
The bad guys wear black
And the good guys be green!


Yeah, they play kind funky,
Like my main man Spunky,
They pump up the jam,
And the bad guys be spam! 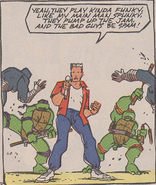 Retrieved from "https://turtlepedia.fandom.com/wiki/Ninja_Rap?oldid=522164"
Community content is available under CC-BY-SA unless otherwise noted.