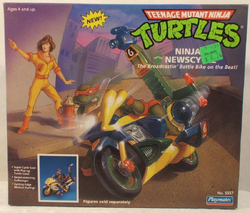 The Broadcastin' Battle Bike on the Beat! THIS JUST IN: The newest news-gathering video vehicle to hit the street is now on the beat. The Ninja Newscycle kicks reptile reporting into high gear.This headliner converts from a cool mutant street bike to a news scooping cycle. Now April O'Neil can cover any story at top speed. And it's fully equipped with all the extras, like the pop-up Turtle-Cam - perfect for recording high speed chases, and the secret sewer-scanning gullwings, loaded with news-breaking firepower. But that's not nearly enough for the Teenage Mutant Ninja News Hounds. Look at what else Donatello has added: two shotgun microphone missiles, 'cuz one is never enough: and a remote Turtle comm for communicating late-breaking bad boy busts. And to top it all off, Donny's added a snap-in satellite dish! Why, because it looks so cool. So go get a newsworthy Ninja and hop on board. Join our mutant press pals in their never-ending battle to bring it to you "Live!" 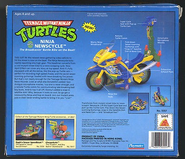 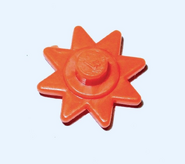 Ninja Star Hub (x4)
Add a photo to this gallery
Retrieved from "https://turtlepedia.fandom.com/wiki/Ninja_Newscycle_(1991_toy)?oldid=487072"
Community content is available under CC-BY-SA unless otherwise noted.