The New York City Fire Department, or FDNY, is the main firefighting force in New York City, making appearances in some Teenage Mutant Ninja Turtles media, alongside the New York Police Department. The FDNY also has an Emergency Medical Services branch know as the New York City Fire Department Bureau of EMS. In real life, the FDNY lost 343 of their men in the September 11th terrorist attacks on the World Trade Center, ranging from the Chief of the Department, First Deputy Commissioner, the department Chaplain, to the many firefighters assigned to the various firehouses around the city's five boroughs, along with many of their fire trucks, ambulances, and equipment. 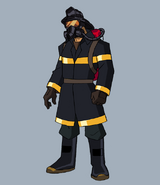