The Neutrinos are a race of extra-dimensional humanoid aliens from Dimension X and friends of the Ninja Turtles. These characters were invented for the 1987 animated series and had first appeared in the episode "Hot Rodding Teenagers from Dimension X". They're easily identified by their pointy ears and their crazy hairstyles.

Neutrino may also be the name of their homeworld. 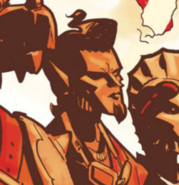