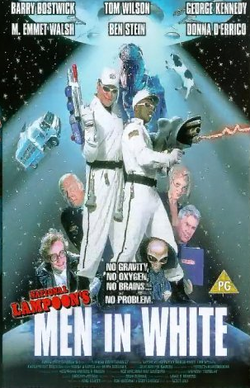 National Lampoon's Men in White is a 1998 made-for-TV parody film, about garbagemen who save the world. It pokes fun at popular science fiction movies of the era, such as Men in Black and Independence Day.

The film features a brief cameo of Michaelangelo from the Next Mutation series, who is surfing out in space.

Retrieved from "https://turtlepedia.fandom.com/wiki/National_Lampoon%27s_Men_in_White?oldid=387935"
Community content is available under CC-BY-SA unless otherwise noted.