Start a Wiki
Napoleon Bonafrog is one of the Punk Frogs a group of four frogs that were mutated and trained by Shredder. As Splinter had named his Turtles after his heroes, the Renaissance artists of Italy, Shredder named the Frogs after his heroes - would-be world conquerors and dictators. The weapon given to Attila by Shredder is a bullwhip.

Shredder had convinced the Frogs that the Turtles were evil, however, when the Frogs were frozen by Captain Hoffman and his Anti-Turtle Force, the Turtles took them back to their lair and defrosted them. Splinter then implored that they show the Frogs compassion. Because of this, the Frogs then double-crossed Shredder and set him up by telling him the Turtles hid the final component of the mutagen he needed in Stonewall Prison. Instead, the Turtles ambushed Shredder and his goons. Along with the other frogs, Napoleon chose to return to his swamp.

In an early episode of Season 5, Napoleon Bonafrog: Colossus of the Swamps, he was transformed into a giant brute with super-strength by Shredder using a weapon invented by Krang. Even in this state, he retained his natural gentle disposition, being unwilling to hurt the Turtles unless directly mind-controlled.

He and Genghis later paid a visit to their Turtle friends in Dirk Savage: Mutant Hunter!, but were almost immediately captured and enslaved by Dirk Savage and A. J. Howard. They were later freed along with the other mutants.

Hulk Napoleon from Napoleon Bonafrog: Colossus of the Swamps 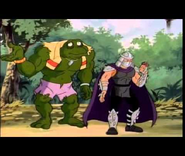 Retrieved from "https://turtlepedia.fandom.com/wiki/Napoleon_Bonafrog_(1987_TV_series)?oldid=493110"
Community content is available under CC-BY-SA unless otherwise noted.