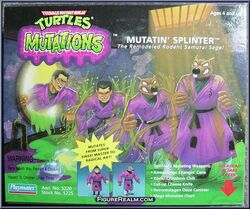 Watch out! The gregarious Green Ones and their foes are makin' a change - literally! These guys start out as mild-mannered mortals, but move a piece here, pull a tab there and - presto! - they mutate into the crazy mutant maniacs you know and love. That's right, Einstein - these fantastic figures actually, really and truly mutate! You know the story: they started out as pets, then got oozed. Well dudes, watch out! 'Cause the Turtles, they now are really changin'! See that fork - it's a sai; see that camera - it's a shell drill. Oh, and that lunchbox is really a machine gun! You got it - each figure also comes with his own crazy mutating weapons assortment, too. This awesome collection feature 4 heroes in a half shell (who mutate from pets to Turtle Teens), Bebop, Rocksteady and Sensei master, Hamato Yoshi (who mutate from human to mutant form). 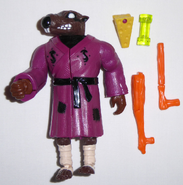 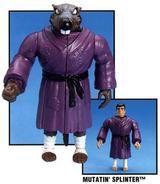 Promotional image of prototype figure
Add a photo to this gallery
Retrieved from "https://turtlepedia.fandom.com/wiki/Mutatin%27_Splinter_(1992_action_figure)?oldid=515816"
Community content is available under CC-BY-SA unless otherwise noted.