Now you can recreate the disgusting mutating process that super-thug Rocksteady went through on that fateful night. A twist here, a turn there and what was once a common human crook mutates into the monstrous and notoriously nasty Mutant Foot fiend, Rocksteady. The Turtles will be shaking in their shells when they see this rabid rhino burst on to the streets. And if his sheer brute strength isn't intimidating enough, Rocksteady's got an awesome arsenal to make mincemeat outta those pesky Turtles. There's the mercilessly mighty mutatin' lunch launcher rifle - filled with food so putridly powerful, no known substance (or Turtle) can withstand its impossible impact. Now the Foot Clan is ready for action with this radically-altered rhino. 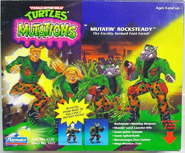 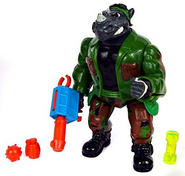 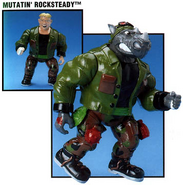 Add a photo to this gallery
Retrieved from "https://turtlepedia.fandom.com/wiki/Mutatin%27_Rocksteady_(1992_action_figure)?oldid=441817"
Community content is available under CC-BY-SA unless otherwise noted.