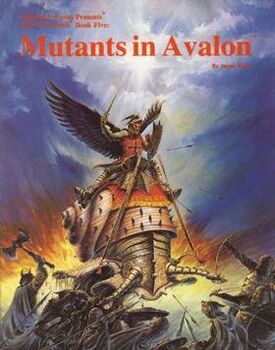 The scenario of Mutants in Avalon concerns the denizens of England, which has regressed in many ways, to a medieval lifestyle following The Big Death.

King Arthur is back! And he's a mutant!

The island of England is mapped and described. Much has changed after the bomb struck. Human life is nearly extinct and Britain is now divided into eight kingdoms, all ruled by intelligent mutant animals. But all is not well. Feuding between the kingdoms promises civil war, then there are the rumors about a human army invading the Waste Lands. The realm needs a leader. A man (or mutant) who can unite the people and restore a nation; King Arthur!

This one has it all. New mutant animals, and insects, new character classes and skills, being British, a new human villain, the treachery of the evil Morgana, Merlin, and magic available to druid player characters!

Retrieved from "https://turtlepedia.fandom.com/wiki/Mutants_in_Avalon?oldid=497509"
Community content is available under CC-BY-SA unless otherwise noted.