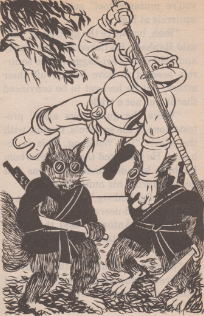 The Mutant Squirrel Super-spies are a band of mutant squirrels who were raised and trained by an ex-Mossad agent. Their mentor was a connoisseur of classical music, and thus named them all after composers.

Each of the Mutant Squirrel Super-spies wielded a melee weapon and an Uzi, and wore night-vision goggles.

The Super-spies had come to Smuggler's Bay to head off a kidnapping at Arthur Horrocks' estate they'd heard about via their contacts at various spy networks. After scuffling with the Ninja Turtles, the teams realized they were on the same side, and thwarted the kidnappers together.

Retrieved from "https://turtlepedia.fandom.com/wiki/Mutant_Squirrel_Super-spies?oldid=469989"
Community content is available under CC-BY-SA unless otherwise noted.