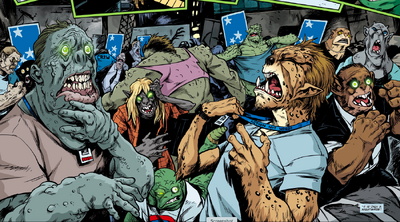 When Old Hob detonated a Mutagen bomb at Baxter Stockman's mayoral victory party near Union Square Park, it caused a majority of the attendants, including several members of the Earth Protection Force, to become mutated into anthropomorphic animals. City at War, part 6

Upon Jonathan Bishop and Hun's assault on the crowd with the Slash clones, Hob had Sally Pride descend with the Mighty Mutanimals' aircraft, rounding up as many new mutants as would fit, before shuttling off. The map of Manhattan in the back of the issue indicates that the original mutagen bomb's fallout has expanded over a significant portion of the East Side and towards the East River, including the the neighborhoods surrounding the church where the Turtles live, teasing that there may be more mutations to come. City at War, part 7

By six months after the mutation incident, these mutagen-contaminated neighborhoods had been designated a quarantine zone which became known as Mutant Town. All remaining unmutated humans had been evacuated out of the zone and into separate decontamination quarantines, and all of the newly mutated humans—estimated to number between several hundred and three thousand—had been forcibly confined inside the zone. Mayor Stockman had had a 50-foot wall built around the entire zone, and the city had established a strict indefinite enforced by the Earth Protection Force, officially to last until the area could be decontaminated of mutagenic agents and the mutated humans' mutations somehow reversed. Since it became clear this was not going to happen in the foreseeable future, Mutant Town became a ghetto for these mutated humans, and their life within its walls had to deal with denied opportunities, separation or dispossession from family and loved ones, dilapidated neighborhoods, abject poverty, homelessness, hunger, cold, and in many cases a difficulty adjusting to their physical changes.TMNT #101