The mutagen bomb was a device that first appeared in The Gauntlet, it was stationed at the Wolf Hotel building and was safely defused by Donatello. A second bomb was seen in flashbacks during the episodes comprising the alternate future Raphael: Mutant Apocalypse story arc. One day, it was lifted into the air and detonated, and it either mutated or killed all of the humans. Mutants that were close to ground zero, like Leonardo, also seemed to have been mutated a second time.

The Kraang logo was shown on the bomb, but it was not revealed who or what instigated the attack. 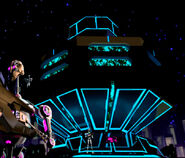 The first mutagen bomb from "The Gauntlet".
Add a photo to this gallery
Retrieved from "https://turtlepedia.fandom.com/wiki/Mutagen_bomb_(2012_TV_series)?oldid=493875"
Community content is available under CC-BY-SA unless otherwise noted.