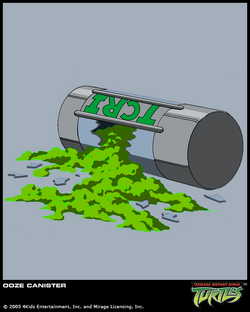 Mutagen, also known as is a mucilaginous substance that has served as a key plot device in nearly every medium of the Teenage Mutant Ninja Turtles. Any creature that is exposed to mutagen will rapidly increase in size, strength and intelligence (sometimes). It is responsible for mutating, among others, Splinter, the Ninja Turtles, Leatherhead, and villains Tokka & Rahzar in Turtles Forever.

The mutagen was incidentally created by the Utroms while they were trying to create a Transmat machine that will allow them to return to their homeworld. Disguised as the technology company T.C.R.I., they had established a base in New York in order to build said transmat while battling the Shredder. However, the transmat's creation produced a waste product that acted as a mutagen. Attempts were made to dispose of it safely, but a freak accident caused a canister to fall off the back of a truck and smash in the sewers, mutating the Turtles and Splinter.

The mutagen causes explicit growth, both physically and intellectually, turning ordinary animals into anthropomorphous humanoids with accompanying intelligence. The known subjects affected by the mutagen were the Turtles, Leatherhead and Splinter.

A different type of mutagen appeared in the 25th Anniversary special of the franchise, Turtles Forever. This variety was native to the 1987 Turtles' dimension, and caused the subjects affected to take on the characteristics of whatever animal they had last been exposed to. Two of the Purple Dragons were affected: Hun was mutated into a hulking turtle, and Mohawk was mutated into a dog. Because of its usefulness in creating mutants from humans, Ch'rell and Karai used this new variety of mutagen to produce a mutant army, which were used along with upgraded 1987 robots in an assault on New York in the 2003 universe.

Retrieved from "https://turtlepedia.fandom.com/wiki/Mutagen_(2003_TV_series)?oldid=487324"
Community content is available under CC-BY-SA unless otherwise noted.