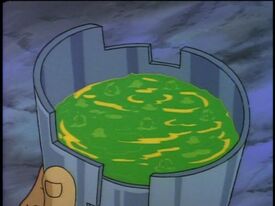 Mutagen, also known as Retromutagen Ooze, is a mucilaginous substance that has served as a key plot device in nearly every medium of the Teenage Mutant Ninja Turtles. It is responsible for mutating, among others, Splinter and the four Ninja Turtles, and villain pairings such as Bebop and Rocksteady and also Tokka and Rahzar.

The mutagen was depicted slightly differently in this cartoon than in the comics; rather than causing its victims to evolve into a humanoid state, it caused them to transform into a hybrid of their original species and whatever creature they have most recently been in contact with. It was revealed in the episode "Invasion of the Punk Frogs" that the mutagen can be made mixing nyotrinaline with Taxon-9. In the episode "Enter: Mutagen Man", a third ingredient was mentioned - Bindex3. In the episode "Shredder & Splintered", it's shown to be acidic. It is also responsible for creating many of the show's mutants, such as Bebop, Rocksteady, the Punk Frogs, Leatherhead, Slash, Groundchuck, Dirtbag, and Mondo Gecko, to name but a few.

The mutagen also had many color variations through the series. The one that mutated the Turtles and Splinter was purple, Bebop and Rocksteady had pinkish glowing mutagen, and Vernon and Irma were affected by a rainbow variant of the green mutagen, which was the most common in the series.

In the episode "Shredder & Splintered", it was mentioned as a neutralizer for the mutagen. Later in the series it appears to be Compound X7, a rare experimental anti-mutagen.

The young turtles about to get mutated by the mutagen.

Shredder holding a canister of mutagen, ready to mutate Bebop and Rocksteady.

The Punk Frogs about to be mutated by some mutagen-contaminated swamp water.

Irma and Vernon get doused with unstable mutagen.

Rocksteady about to mutate Slash with super mutagen.

Add a photo to this gallery
Retrieved from "https://turtlepedia.fandom.com/wiki/Mutagen_(1987_TV_series)?oldid=584172"
Community content is available under CC-BY-SA unless otherwise noted.