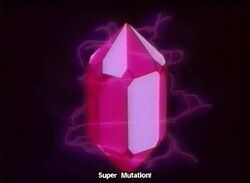 The MutaStones (ミュータ石, Myūtaseki?, lit. "Mutanite") are, as the name implies, stones with special mutagenic properties in Mutant Turtles: Chōjin Densetsu Hen. Two known sets exist: one kept in the Neutrino Kingdom, and another shaped into Magatama and placed on the back of an ancient Japanese mirror.

The first set allows the user to turn into a "SuperMutant" version of one's self (parodying sentai series such as Sentai/Power Rangers) through a process called Super Mutation. By crossing their arms whilst holding the first set of MutaStones, the Turtles are able to combine into one being known as the Turtle Saint through a process called Saint Mutation.

The second set turns the user into a "Metal Mutant" (similar to the characters of the anime/manga Saint Seiya) for six minutes through a process called Mutadocking. There are seven MutaStones in this set:

Retrieved from "https://turtlepedia.fandom.com/wiki/MutaStone?oldid=450569"
Community content is available under CC-BY-SA unless otherwise noted.