Mrs. Jones is the mother of Casey Jones.

In the IDW comics Mrs. Jones is mentioned only by name or in flashbacks. She died before the beginning of the story by cancer, and her sickness and ultimate death caused her husband, to become a violent alcoholic offender, who vented his frustration on Casey Jones regularly. On her deathbed she wrung her son, who suffered from the attacks of his father every day, to make a promise to take care of him by not showing her husband his "true strength". However, this caused Casey to serve as an unwilling target for his father's fists and baseless allegations.

One night Raphael, who separated from his family and eked out a miserable existence as a tramp shortly after his mutation, was attentive to a renewed outburst by Mr. Jones, and saved Casey's life, whereupon the two quickly became friends. Finally, Arnold Jones went so far that Splinter decided that Casey should finally part ways with his no-good father and he took him into his own family. 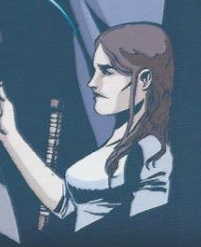 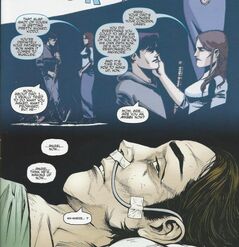 Add a photo to this gallery
Retrieved from "https://turtlepedia.fandom.com/wiki/Mrs._Jones_(IDW)?oldid=556923"
Community content is available under CC-BY-SA unless otherwise noted.