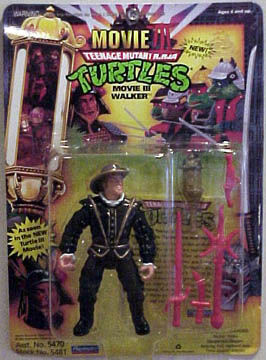 Walkers’ a ruthless so-and-so; he’s mean, he’s evil, and worst of all, he’s in 17th century Japan. He’s a treacherous trader who will stop at nothing to get his way. He’ll double-cross anybody, even his partner, the wicked Warlord. The Turtles don’t even scare him – he just thinks they’re wearing masks. That’s how ruthless he is. Walker has an army of moronic mariners who’ll do anything he says, even the bad stuff! But that doesn’t mean Walker won’t do some of the dirty work himself. Why do you think he’s got the packin’ pistol and fencing foil? That’s right, this primitive pirate would love to cut the Turtle Teens down to his level with his ever-handy halberd axe. And if he can get his hands on the time-slippin’ scepter, he’ll be rich, rich I tell you, rich beyond his wildest dreams – that is, if the Turtles don’t turn his dreams into a nightmare first! 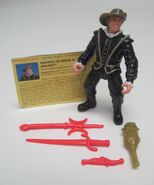 Back of package
Community content is available under CC-BY-SA unless otherwise noted.
Advertisement