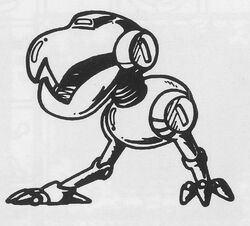 In almost every game Mousers usually occur as normal level opponents and are often used as an annoyance enemy in TMNT games, being hard to hit and having cheap attack tactics, but have the tendency to be destroyed easily. However in some, of the video games, far greater Mousers with advanced capabilities appear:

In the TMNT arcade game, Mousers break through walls and pavement in hordes, and have the ability to latch onto the player's Turtles' arm, forcing them to shake it off with rapid button presses in order to negate its life-draining bite. The game's third boss, Baxter Stockman, drops Mousers from his floating contraption.

In the first console game, they are featured primarily as enemies in sewers. One of the bosses is Big Mouser, a stationary Mouser that is several times larger than even the player's selected Turtle. It fires beams from its eyes, and is only vulnerable when it opens it mouth to produce another standard Mouser.

A mini-boss was the Mother Mouser, a large Mouser (although much smaller than its predecessor, the Big Mouser, and its successor, the Giant Mouser, which was piloted by a Foot Soldier.

Mousers are enemies in the game. Also, the game's fourth stage boss, Baxter Stockman, drops Mousers from his floating contraption.

Mousers appear in the SNES version of the game, they can be seen in the background of Chrome Dome's stage.