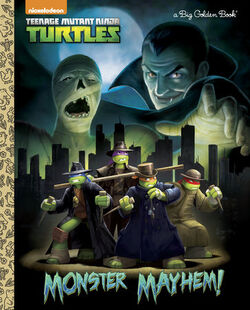 Monster Mayhem! is a Big Golden Book loosely based on the Tales of the Teenage Mutant Ninja Turtles (2012 TV series) episodes The Crypt of Dracula, The Frankenstein Experiment, and Monsters Among Us!. It was written by David Lewman and illustrated by Patrick Spaziante.

When a vampire and a werewolf attack New York City, it’s up to Nickelodeon’s Teenage Mutant Ninja Turtles to mash the monsters.[1] Boys and girls ages 3 to 7 will be thrilled with this full-color Big Golden Book. Jump into action with Nickelodeon’s Teenage Mutant Ninja Turtles! These four ninja brothers stand together to protect their city—and their planet—from the forces of evil! Join Leonardo, Raphael, Michelangelo, and Donatello for nonstop ninjutsu action as they face off against mutants, aliens, and The Shredder himself!

Retrieved from "https://turtlepedia.fandom.com/wiki/Monster_Mayhem!?oldid=319458"
Community content is available under CC-BY-SA unless otherwise noted.