The turtles return to New York City, discovering a teenage rock band named Merciless Slaughter practicing in the Shredder's former hideout. Exposed to mutagen, a guy named Mondo is mutated into a humanoid gecko, Mondo Gecko, who takes down the Shredder's Foot robot.[1] 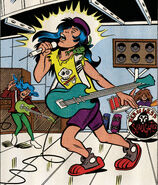 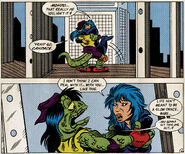 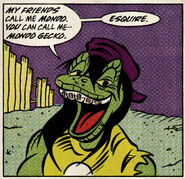 Add a photo to this gallery
Retrieved from "https://turtlepedia.fandom.com/wiki/Mondo_Metal?oldid=331160"
Community content is available under CC-BY-SA unless otherwise noted.