Miyamoto Usagi is the main protagonist of the Usagi Yojimbo comic book series. Usagi is an anthropomorphic rabbit (Usagi is Japanese for "rabbit") and a rōnin (a samurai without a daimyō or a master) now walking the musha shugyo (warrior's pilgrimage). He has made several crossovers with the Teenage Mutant Ninja Turtles throughout the years in comics, cartoons, video games, and action figures. While he is a friend of all the Ninja Turtles, he is usually paired up with Leonardo. 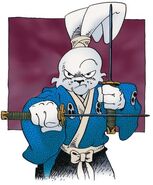 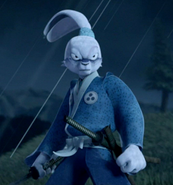 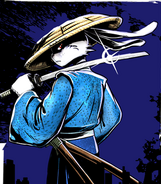