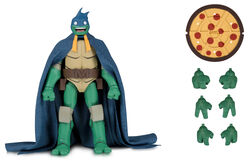 Based on the hit DC Comics crossover, Batman vs. Teenage Mutant Ninja Turtles, Mikey is decked out in Batman’s iconic cowl and cape in this awesome 2019 San Diego Comic-Con exclusive. Accessories include a sewer lid, pizza and extra sets of hands. This figure is limited to 10,000 pieces.

Retrieved from "https://turtlepedia.fandom.com/wiki/Mikey_as_Batman_(2019_action_figure)?oldid=512870"
Community content is available under CC-BY-SA unless otherwise noted.