In the IDW continuity, the headquarters of the Mighty Mutanimals is the location in New York City that serves as their group home and primary base of operations. At least one and at most five different locations have been portrayed serving this function, with some ambiguity as to whether or not they are the same location. In the map of Manhattan published with City at War, part 1, Mutanimals HQ is shown to be located in the Lower East Side (LES) neighborhood of Manhattan, near the East River facing Brooklyn.

In the story arc City Fall, the characters Old Hob and Slash are living together in an apartment where they also store their weapons. Splinter visits the apartment to arrange a pact: Splinter will infiltrate StockGen to steal mutagen for Hob to build a mutant army for the stated purpose of protecting other mutants, and back up Hob in these goals. And in exchange, Hob and his mutants will back up Splinter and the Turtles in their fight against the Foot Clan. In the Monsters, Misfits, and Madmen arc, Hob and Slash are still living in the apartment, but are now joined by Pete, whom they have changed from an ordinary pigeon with the mutagen Splinter provided. Hob abducts Lindsey Baker and takes her to this apartment to try to coerce her into helping him build more stable mutants. When a sample of Splinter's blood containing the psychotropic compound is injected into Slash and greatly enhances his mental faculties, Lindsey agrees to stay and work with Hob, as his goals and her mutation research goals now overlap. But Lindsey insists that the apartment's conditions are inadequate to use as a laboratory and need to be upgraded.

In the Teenage Mutant Ninja Turtles: Mutanimals miniseries, the Mutanimals now appear to be occupying an entire abandoned building. Hob, Slash, Pete and Lindsey live there, as do Lindsey's recently-produced mutants Herman the Hermit Crab and Mondo Gecko, changed with both mutagen and the psychotropic compound. By the end of the miniseries, liberated Null Group mutants Seymour Gutz, Man Ray and Sally Pride are also living there. The Mutanimals are still living here in the Order from Chaos arc when Michelangelo is briefly invited to join them, and a running gag in this arc suggests the possibility that, by the end of the arc, Pete may have accidentally damaged or destroyed the building from a kitchen fire.

In the story arc Desperate Measures, the Mutanimals appear to be living in one or more apartments in what appears to be a different abandoned building, though whether this is meant to portray the same building as before is never made clear. The group are watching television together in a third-floor apartment when Slash, actually remote-controlled by Agent John Bishop, mounts a home invasion against the Mutanimals.

In the short story Mutagen Maintenance, it is shown that the Mutanimals are again living inside a building, though again it is never established whether it is the same building as before. The building's exterior is never shown, and only the interior of Seymour's room is shown in any detail.

In the story arc ...And Out Came the Reptiles, the Mutanimals are living in a building with a similar appearance to the one they lived in during the TMNT: Mutanimals miniseries.

Starting with issue #101, the maps published since the beginning of City at War no longer mark Mutanimals Headquarters, at its LES location or anywhere else. But in-story, the Mutanimals are said to operate within the newly-designated, quarantined Manhattan neighborhood of Mutant Town, also located on Manhattan's East Side but to the north of the LES.

Mutanimals Headquarters' location in the Lower East Side is marked on the Zones of Criminal Control maps published during the City at War story arc. Its coordinates are roughly 40°42'36.23"N, 73°59'2.37"W, near the waterfront just southeast of the intersection of South Street and Avenue C. In real life, these coordinates correspond to a parking lot just east of Pier 36 New York, an event venue. 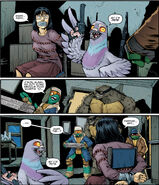 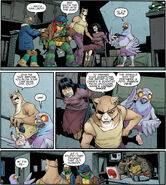 Add a photo to this gallery
Retrieved from "https://turtlepedia.fandom.com/wiki/Mighty_Mutanimals_Headquarters_(IDW)?oldid=511654"
Community content is available under CC-BY-SA unless otherwise noted.