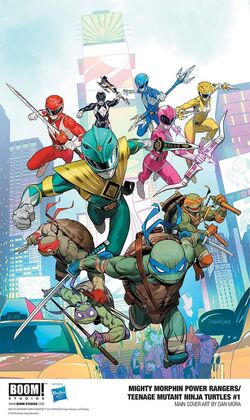 The Power Rangers arrive in New York City to find Tommy Oliver - AKA The Mighty Morphin Green Ranger - but soon discover he's joined forces with the villainous Shredder and the Foot Clan! As the Rangers are sent reeling by this betrayal, they're confronted by another (fr)enemy - the Teenage Mutant Ninja Turtles! Can these heroes find a way to work together to defeat the bad guys and save the world from total destruction?!

Retrieved from "https://turtlepedia.fandom.com/wiki/Mighty_Morphin_Power_Rangers/Teenage_Mutant_Ninja_Turtles?oldid=570915"
Community content is available under CC-BY-SA unless otherwise noted.