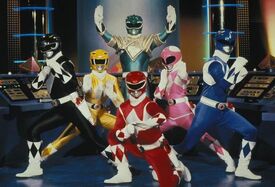 The Mighty Morphin Power Rangers are the inaugural team of the Power Rangers series and the best-known of the franchise's 20+ years of tenure. Originally, "Mighty Morphin" was just a descriptor adjective, but with the advent of later teams/series, it has become part of the team's de facto name to differentiate it from the others.

The first five teens were chosen by Alpha 5 and Zordon to defend against the assault Rita Repulsa was perpetrating on Earth. A sixth member, Tommy, was enlisted after Rita's spell on him was broken.

The Rangers and Ninja Turtles clash when Tommy pretends to defect to the Foot Clan in order to pull out Tyler, one of the Foot recruits. They realize they are on the same side and begin spending time with each other while attempting to find out what Tommy was up to. After Shredder disrupts the Rangers' connection to the Morphin Grid, they give their Morphers to the Turtles and April O'Neil to use.